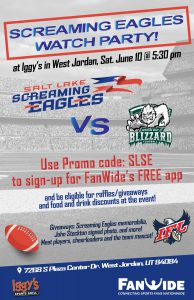 FanWide is excited to partner with the Indoor Football League’s (IFL) most interactive team, The Salt Lake Screaming Eagles, for a massive watch party for the game on Saturday, June 10th against the Green Bay Blizzard. 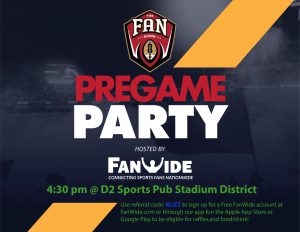 We are excited to announce a massive pregame meet-up with the best new IFL podcast in the business, The F.A.N. Show. This event is taking place during the BIG Green Bay block party for the game this Saturday, June 10th against the Salt Lake Screaming Eagles.

The #FanExperience Pregame Party is being hosted at the D2 Stadium District Sports Pub. We want to see every Green Bay Blizzard for the next stop on The F.A.N. Show Tour 2017, and to be part of the show’s first LIVE Pregame party, coordinated by FanWide! The LIVE Pregame show kicks off at 4:30 p.m. so be sure to be there early to grab a great seat.

In a city where soccer reigns supreme in the spring, thanks in large part to the 2016 MLS Cup Champion Sounders (and the perennial cellar-dwelling Mariners), the buzz in Seattle around soccer is louder than ever.

Whether you’re a fan of Major League Soccer, Premier League (England), La Liga (Spain), Ligue 1 (France), Series A (Italy) Liga MX (Mexico) or international world cup qualifying games, there is no shortage of matches coming up, and Seattle is home to some of the best soccer sports bars and watch parties in the country.

Killing cable at home? Wanting to watch a game with other soccer hooligans as crazy as yourself? Here are some of the top soccer bars in Seattle for 2017 that you need to visit to for a pint on game day for the best viewing parties in the city.