It’s the last chance for teams to make the upcoming NCAA Men’s Basketball Tournament, better known as March Madness!  The Southeastern Conference (SEC) is home to many staples of the tournament such as #6 Kentucky, but there are a few teams, such as South Carolina, right on the bubble. The winner of the SEC Tournament will be given an automatic bid into the big dance, so much is at stake for each team! 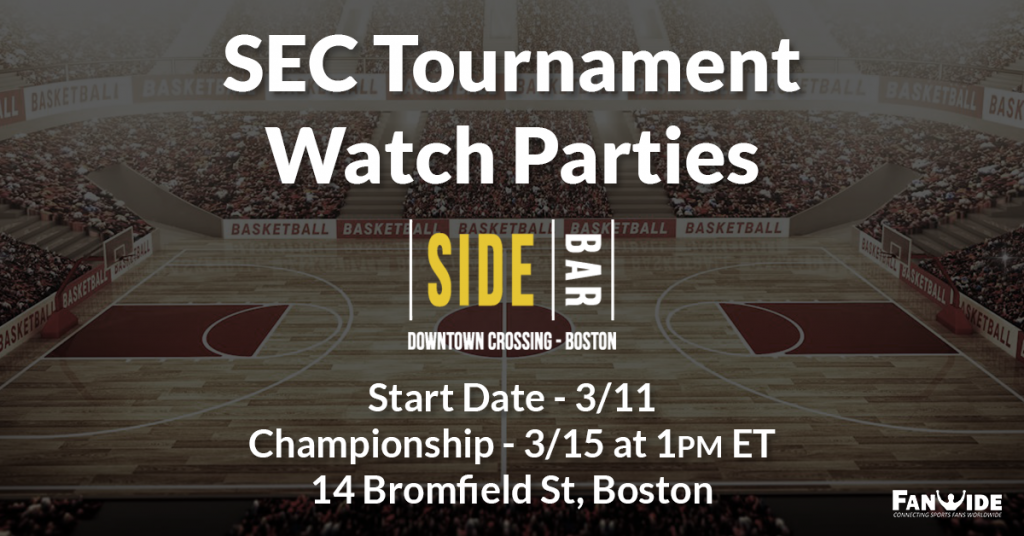 The Los Angeles Clippers have a solid social media presence, considering Los Angeles is a 2nd largest media market in the United States (according to Nielsen). The Clippers have about 1.47 million Twitter followers, which ranks above average among NBA teams. The LA Clippers Instagram page, with 2.3 million followers, is well above the average of NBA teams and its Facebook page, with almost 3.8 million likes, is 13th in the league. The sum total of followers across the three social media outlets of the Clippers totals approximately 7.57 million. These accounts provide Clippers fans with interactive fan-based content, scores, team updates, and more.

The Sacramento Kings social media presence certainly makes Kings fans feel #SacramentoProud. With Vivek Ranadivé, founder of TIBCO, at the helm of the Kings franchise, the Kings are at the forefront of technology in the NBA. Considering Sacramento is 20th in regards to media market size in the United States (according to Nielsen), the Kings have successfully constructed a social media following on Instagram, Facebook, and Twitter. The @Kings Twitter, home to the NBA’s “loudest fans,” has about 1.05 million followers, which ranks just below the average among NBA teams. The Sactown Kings Instagram page, with 1.2 million followers, provides interactive posts for fans like Kings Trivia as well as updates and the latest news for everything @Kings. The Kings Facebook page, with almost 7.5million likes, ranks 8th in the league, an astonishing number relative to its media market size. The sum total of followers across the three social media outlets of the Kings totals approximately 9.75 million. The social media platform of the #SacramentoKings provides an outstanding method for Kings fans to connect with the team regardless of where they live.

The Phoenix Suns may play for the city of Phoenix, but they also represent the entire desert area of southwestern USA. Although the Suns have struggled in the recent past, a young core has been established that are set to rejuvenate the city of Phoenix. Revolving around Devin Booker, the Suns have begun to form a core group of players around their star player. The 2018 first overall pick, Deandre Ayton, is progressing nicely, along with Kelly Oubre Jr. and Mikal Bridges. They have not made the playoffs since 2010, but there is no reason not to believe that this is the year that things will change. Deandre Ayton, the 2018 first overall pick, is progressing nicely, along with Kelly Oubre Jr and Mikal Bridges. This young core also has veteran point guard Ricky Rubio who will be integral as a veteran in the locker room. Like in Philadelphia, Phoenix has been “trusting the process” the past couple of seasons in order to create a core foundation of young stars that is able to make a playoff push.

Since the inception of the Orlando Magic, there has always been a buzz around Magic basketball. Magic fans are known for their loyalty and hope. Ever since the dominance of Penny Hardaway and Shaquille O’Neal in the late 1990’s to the dominance of Dwight Howard in the late 2000’s, Magic fans have always had reasons to be excited. Although there was a long period of less than stellar performances, Nicola Vucevic and the 2018 Magic seem to have ended the lackluster era as they reached the playoffs in the 2018-19 season. One reason why Magic fans love their team because it is the only professional sports team in the big 4 (NFL, NBA, NHL, and MLB) that play in Orlando.

Due to their location in the nation’s capital, the Washington Wizards gather a lot of fan interest. In DC, there are a lot of Washington Wizards fans. The Wizards draw many fans to watch their games due to the phenomenal history of the Washington Bullets, especially in the 1970’s. Within that decade, the Bullets won 4 conference championships, as well as one NBA championship in the 1978 season. If you want to feel like you are in DC a part of every Washington Wizards game, there are several ways to stay connected. There are many fan clubs that include day to day news and rumors about the Wizards’ most recent transactions and reports, many of which are on Instagram. The most prominent fan page accounts are @wizardsnations and @wizardswave.

Since the Dallas Mavericks were founded in 1980, they have put a strong emphasis on fan engagement. Considering Dallas is the 5th largest media market in the United States (according to Nielsen), the Mavericks have successfully maintained a solid social media following in the three major platforms. The @Mavs have about 1.59 million Twitter followers, which ranks well above the average among NBA teams. The Dallas Mavericks Instagram page, with 1.2 million followers, is a highly engaging resource for Mavs fans everywhere. The @Mavericks Facebook page, with almost 4.375 million likes, ranks 12th in the league. The sum total of followers across the three social media outlets of the Mavericks totals approximately 7.165 million. All three of these accounts provide interactive fan-based content, scores, team updates, and more which allow #Mavs fans to connect with their team regardless of where they live.

As Donovan Mitchell, Rudy Gobert, and Mike Conley lead the Utah basketball squad into an exciting period of winning basketball, Utah fans and NBA fans everywhere have begun to #TakeNote. The Jazz are serious contenders in the NBA, and they also have developed a highly competitive social media presence as well. Considering Utah is 30th in media market size in the United States (according to Nielsen), the Jazz have created highly pages on Instagram, Facebook, and Twitter. The Jazz Twitter Page, with 937 thousand followers, posts engaging content for Jazz fan in Salt Lake City and around the world. The Sactown Kings Instagram page, with 858 thousand allows Jazz fans to follow Spida Mitchell and the rest of the Jazz players throughout the year. The #UtahJazz Facebook page, with more than 1.8 million likes, is another excellent resource for Jazz fans everywhere. The sum total of followers across the three social media outlets of the Jazz totals approximately 3.595 million. All three social media accounts of the Jazz allow Utah fans to #TakeNote regardless of where they live.