Other than the Olympics, there is nothing quite like the World Cup, where the beautiful game of soccer is played at the highest level. It is the fans, though, that elevate the entire experience to a whole, different level, with their unmatched passion for the sport and of their respective national teams. 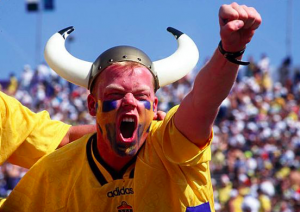 These same fans also partake in one of the best traditions of World Cup lore: parties. These parties are held in every sort of venue imaginable and are often over the top, with lots of shouting, and singing; endless eating and drinking; plenty of high-fiving, chest-bumping, and hugging; and even some crying.

That being said, here is a look back at the rich history of World Cup partying, starting in 1994.

Brazil came into the 1994 World Cup in the US mired in a 24-year drought, having gone title-less in the previous five World Cups. They came out as the champs, and naturally, the Brazilians at home celebrated like crazy. Brazil’s 3-2 triumph over Italy via a penalty shootout sparked widespread celebrations, including the party of a lifetime at the Copacabana Beach where fans with painted faces reveled in Brazil’s return to glory. Tens of thousands congregated on the beach and spent days drinking beer, singing, and dancing.

1998: A Breakthrough in France

France won the nation’s first ever World Cup on home soil, and of course, they partied hard afterward. Millions assembled at the Arc de Triomphe, each one waving the famous tri-colors of France while chanting—what else?—“On est le champion!” (We are the champion!) This victory party was a long time coming, and the French made sure it was a celebration to remember, indeed.

The parties were aplenty in South Korea when it co-hosted (along with Japan) the 2002 World Cup, but none stood out quite like the outdoor party held at The Reds’ semifinal match against Germany. The game ended with the co-hosts suffering a heart-breaking 1-0 defeat, but even that disappointment couldn’t dampen the festive spirit of an estimated 7 million South Koreans who assembled outside the Seoul World Cup Stadium to watch the match on huge outdoor screens. The result ultimately didn’t matter, as the party continued, this time as a celebration of the country’s surprising yet inspiring World Cup run that saw the Taeguk Warriors become the first (and so far only) Asian country to have reached the final four. Long after the final whistle, fans were still chanting and shouting, beating drums, drinking the night away, and reveling in what had been a World Cup to remember.

2006: The English Invasion of Frankfurt, Germany

The English always know how to through a party at a World Cup, and Frankfurt was no different. Some 70,000 England fans converged on Frankfurt and partied like only the English know how to. The England fans flocked to every bar in the city, with O’Reilly’s Irish bar among the popular haunts. It was an important World Cup for them because it was the country’s last good cup run. The 2006 team was one of England’s strongest lineups with some of the country’s best ever players including Beckham, Owen, Rooney, and Gerrard. Another player who would make his mark was lanky striker Peter Crouch who scored a crucial goal against Trinidad and Tobago. Coral claim that Crouch took the soccer world by storm in 2016 with his infamous robot dance. Unfortunately fans didn’t get to see it at the actual World Cup, as just days prior to the start of the tournament, the towering striker decided to ditch the iconic celebration, vowing instead to focus more on scoring goals and winning matches.

That, in hindsight, was actually maybe a good thing. Crouch breaking out his trademark dance would have caused absolute mayhem among the English fans watching the game and partying hard in the bars of Frankfurt.

2010: An Intersection of Nations at Lucky’s Bar, South Africa

The 2010 World was South Africa’s party on the global football stage, and the local bars benefited greatly. Lucky’s Bar in Phokeng outside Rustenburg, in particular, became a go-to destination as it hosted party after party, beginning in the lead up to the games all the way up to the final, which saw the Spanish national team lifting the trophy. For about a month, Lucky’s Bar served as a pulsating intersection of people all around the world, as fans continually trooped to every party hosted by the famed bar on the outskirts of the Royal Bafokeng Stadium.

World Cup fever in the US reached a zenith in 2014, and the massive viewing party hosted by Lucky’s Pub (no relation to Lucky’s Bar, by the way) in Houston was undeniable proof. Hundreds of soccer-crazy patrons packed the preeminent sports bar in the city and watched the US draw with Portugal. The fans turned Lucky’s Pub into a mini-stadium complete with good food, overflowing booze, and armchair analysis. The party was nothing short of electrifying, with everyone shouting and chanting to their hearts’ content.

The 2018 World Cup in Russia is just a few months away, but the fans are certainly in party mode already.