As FanWide’s search for the Top Football Fan Club continues, many strong candidates from the Cowboys have come to our attention and show strong signs of taking home the crown. One of these is the Southern California Dallas Cowboys Fan Club (SCDCFC) led by Robert Morales. SCDCFC hosts game watch parties all across Southern California and is so large that they even sell merchandise for their club. With such a large group of fans, they have even been recognized by Cowboys Experience as their #1 fan club.

Visit FanWide.com to find a Dallas Cowboys game watch party or fan club near you.

In an interview with Robert, FanWide asked a few questions as to why he believes that SCDCFC has what it takes to be the Top Football Fan Club:

What is your name?:

What city are you from?:

Which fan club do you support?:

Where does your fan club meet (name, location)?:

How many members are in your fan club?: 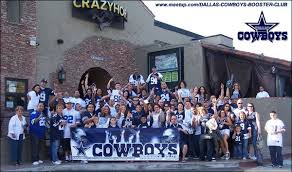 What makes your fan club unique?:

We have 8 chapters in our club which covers all of Southern California and it is kid friendly.

Do you have any connections to the team?:

Yes, we have had many autograph signings with various players old and new. We are currently in contact with current players, staff members and agents for the Dallas Cowboys. “JJ” (owner Jerry Jones) himself knows who we are.

What is your favorite memory?:

Driving Kavon Frazier #35 from an autograph signing from Bakersfield to Los Angeles to meet up with Keith Smith. Also, having Jason Witten sign my wife’s jersey before he went in at training camp, her jersey was the only one autographed as she is a big fan.

Beside watching the games, what other activities does the club participate in?:

We are a family-friendly club. At our meetups there are weekly raffles, raffle prizes include autographed memorabilia, Cowboys merchandise and free kids raffles. We are involved in the community of our chapters. We volunteer with the missions, we have made blessed bags for our neighbors on skid row. We have monthly donation drives for various causes such as children’s hospitals, local community thrift collective, toy drive for the local church, cancer walks for St. Jude and much more. Every bye week we have a family club gathering at a local park where all chapters meet up. We have a bbq, games, and even made this season’s bye week a carnival for our young members also known as our “Jr. stars”. We try to make a difference on and off season.

The Southern California Dallas Cowboys Fan Club is truly one that stands out. In addition to their watch parties, they focus on community bonding with their barbecues and carnivals. They do a lot of charity work for Southern California in order to support the community around them. It is without a doubt that SCDCFC has what it takes to be the nation’s Top Football Fan Club. We are still accepting entries to be named the Top Football Fan Club – to learn more or enter visit http://fanwi.de/TFFC.