FanWide, the world’s largest fan club network, has compiled and analyzed the data for our football survey and the results are in! The topics we chose to research were centered around the similarities and differences of football and rugby. Rugby is similar to football in many ways – such as some of the strategy, the physicality, but also different where it counts like stoppage times. Below are some of the highlights that were produced from your responses to show why rugby may be your new favorite sport.  You can also find local rugby watch parties with FanWide. 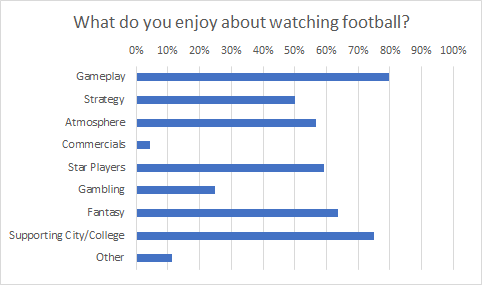 Leading the pack with 80% of fans, “gameplay” was the #1 reason fans enjoyed watching football, followed closely by “supporting city/college” with 75%. The excitement that football bring is in no doubt the action-packed, hard hitting gameplay that we all grew up playing as kids. And supporting your hometown or alma mater has always mattered to a passionate fan. Rugby has that action-packed gameplay that football fans love and has teams all around the country. Search around for your local team with FanWide! One of the “other” options included getting together with family and friends. 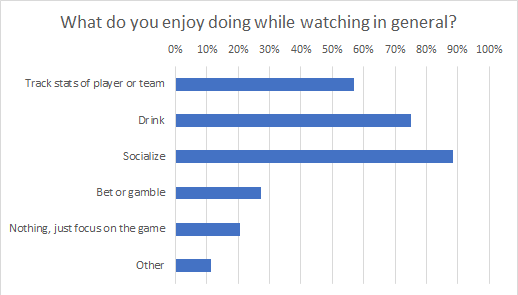 While watching the game, 89% fans like to socialize with others and 75% also like to drink (alcohol) with their fellow fans. From first-hand experience, rugby fans are a tight-knit group, but also welcoming to others willing to learn and watch the sport. Making connections with rugby fans should be no problem at the game, and what better way than to cheers your new-found mates at the next try! 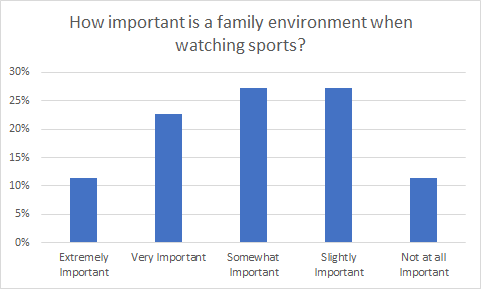 Family often comes first, even when attending a game for your favorite sports team. Rugby often comes with the stigma that the environment is rowdy and loud. While that may be perfect for some, for others, especially families, may not want such a rowdy crowd. 89% of fans believe that a family environment holds at least some importance to them. Rugby owners and teams are definitely aware of the situation and most teams are going out of the way to create a welcoming environment for everyone.  For example, Seattle’s own Major League Rugby team, the Seattle Seawolves, even offers a youth night, and during the matches you will often find kids playing rugby on the practice fields. You can often find specific family-friendly sections in many of the stadiums and arenas around the country, so make sure to keep an eye out for those tickets! 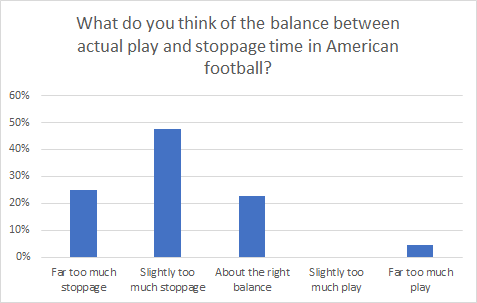 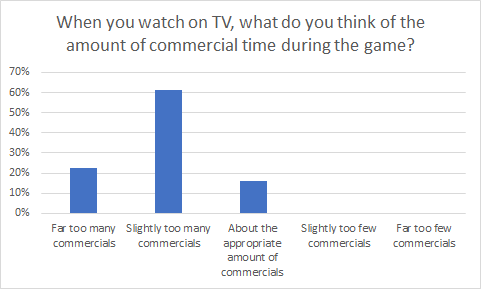 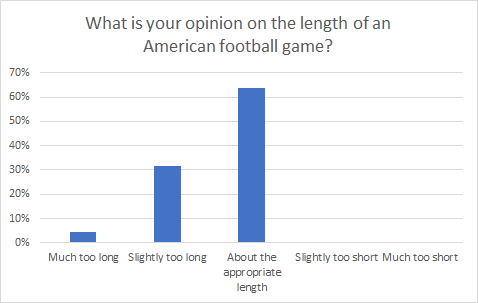 For someone used to soccer or basketball, a common criticism of football is that there’s “so much standing around” or “so little action”. 73% of fans think there is too much stoppage time in American Football. A big reason for the stoppage time issue is the relationship between football and broadcast. Commercials are a huge reason for the amount of stoppage between drives, kickoffs, etc. 84% of fans think there are too many commercials when watching American Football. Additionally, over 35% of fans believe that a football game lasts too long. Rugby, as a flow sport, is much more fast-paced than football, much less commercial and stoppage time, and lasts only two 40-minute halves, plus a 10 minute halftime intermission. The halves do not have any breaks, and like soccer a few minute of additional gameplay are added to account for injuries or stoppage time. 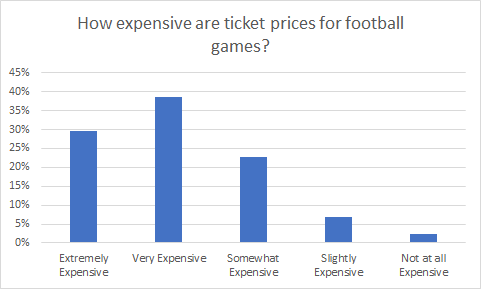 97% of fans think that ticket prices are too expensive. This may vary from geographical region to region, but the NFL average for a ticket sits at around $100, face value. Often, the resale value for a ticket can go upwards of double or triple the original face value of the ticket, depending on the matchup.  In comparison, a typical ticket price for a rugby match is around $30. 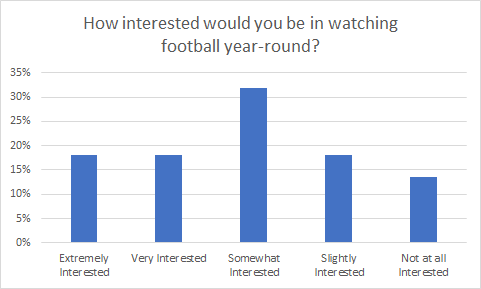 With both the NFL and the NCAA starting and ending their seasons around the same time, there is a huge gap where, sadly, there is no football. Our fans can sympathize with the football void from February to September; 86% of fans would have some sort of interest in year-round football. In the US, Major League Rugby runs from February until June, filling that football-less void. However, with new emerging leagues such as the Alliance of American Football (AAF), the XFL, and the Fan-Controlled Football League (FCFL)  this may become less of an issue.

Our methodology consisted of sending out the survey link to all FanWide fans through our newsletter, promote through our social channels, as well as promote through our personal social channels. We believe our participants generally fit a profile of a male, 18-30, living around the Seattle area. For a further study, we would try to extend our reach to other parts of the nation to gain a better overall understanding of our data. However, we believe that many of the data points will remain more or less the same.  In conclusion, we believe that rugby offers football fans many of the aspects of the game which they love, yet it eliminates a lot of the components which they hate.  Should rugby be your new favorite sport?