The fan club meets at Walk-Ons in Covington, LA for the away games.  Walk-Ons is co-owned by Saints quarterback Drew Brees. 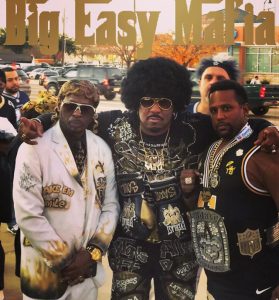 4,500+ This fan club is open to any and all Saints fans. We also have chapters in the UK, Germany, and Sweden. We are trying to get the Saints into as many countries as we can.

6.) What makes your fan club unique?:

We have a strong focus on charity. Our charity of choice is Angels’ Place in Metairie, LA. 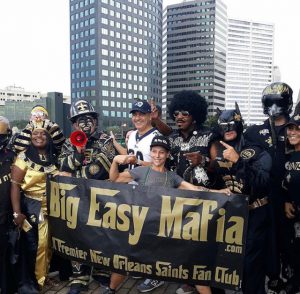 7.) What is your favorite memory?:

My favorite memory to date has got to be the Steve Gleason blocked punt against the Falcons. It was the first game back in the Superdome since Hurricane Katrina. Everyone was hugging, crying, laughing etc.

8.) Besides watching the games, what other activities does the club participate in?:

We do a lot of charitable activities around the City of New Orleans as opportunities arise. We have participated in a school supply drive for the flood victims of Baton Rouge- we collected clothes for them as well. We do annual charity events for Angels Place, but throughout the year we do any charity event that might come up. Aside from promoting and participating in the events we also set up a booth and sell Big Easy Mafia merchandise donating 100% of the profits made to the sponsor of the event. 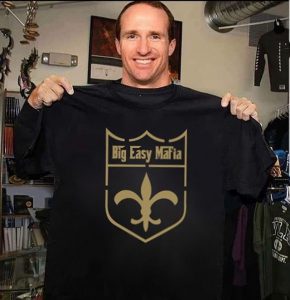 The Big Easy Mafia is one of the largest Saints fan groups in the world.  With already over 4,500 members in two continents, the fan group has big plans ahead. One of the things that makes them so special is their dedication to charity.  Their commitment to the New Orleans Saints and its surrounding communities have made it a strong contender in FanWide’s Top Football Fan Club Competition. We are still accepting entries to be named the Top Football Fan Club – to learn more or enter visit http://fanwi.de/TFFC.