As one of the league’s historic franchises in America’s largest city, it would make sense for the New York Knicks to have a massive and widespread following. The many Knick fans have established a vast network of fan groups, a network which includes both online fan communities and physical fan clubs. Some prominent online Knicks fan communities are Daily Knicks, the team Fansided blog, Posting and Toasting, the team SBNation blog, and ultimateknicks.com. Each of these online communities provides Knicks fans with news, analysis, and the opportunity to stay connected with Knicks fans everywhere. New York Knicks fan clubs spread across the country and even across the world. To find a Knicks fan club near you, there is no better place to look than FanWide, the world’s top fan club network. Please contact FanWide if you are interested in creating your own New York Knicks fan club, or registering your Knicks fan club with our database.

Given the rich history of basketball, from the ABA to the NBA, and the role of superstars, such as Dikembe Mutombo and Carmelo Anthony, in the Mile High City, it should come as no surprise that the Nuggets have a large and widespread fanbase. To stay connected, displaced Nuggets fans have formed numerous fan clubs and other fan communities, both online and offline. Online Nuggets fan communities include Denver Stiffs, the team SBNation blog, and Nugg Love, the team Fansided blog. The best way to find actual watch parties is through FanWide, the world’s top fan club network. FanWide’s Nuggets fan club database is an excellent place to find Nuggets watch parties near you. Please contact FanWide if you are interested in creating your own Nuggets fan club, or registering your Nuggets fan club with our database.

All across the NBA, 76ers fans are known for their passion and devotion to their team. This ravenous energy extends far beyond the City of Brotherly Love. 76ers fans and fan clubs are spread all across the nation and they always bring energy and intensity in support of their team. To connect with their fan network, the 76ers offer numerous opportunities and resources for fans young and old alike, all of which can be found on the team’s official website. Club 76 offers several benefits for fans, including premier season ticket access, free giveaways, and access to exclusive events. The Kids Club helps younger fans connect with their team by providing numerous perks, including exclusive 76ers gear. The team also hosts several camps, which give kids the opportunity to improve their skills and interact with players. Few NBA organizations can match the level of fan engagement put forth by the 76ers organization.

Despite their small market size, the Milwaukee Bucks have a strong national, and international, fan network, with fan clubs spread across the nation. To maintain a close connection with their vast network of fans, the Bucks have a strong social media presence. The team has official accounts on Facebook, Twitter, and Instagram, currently with over 1.8 million Facebook likes, 1 million Twitter followers, and 2 million Instagram followers. Each of these accounts serves as an excellent source of news, highlights, and other Bucks content for fans worldwide. The official team hashtag, and a common mantra among Bucks supporters, is #FearTheDeer.

With their location in New York, America’s most populous city, the Nets have built up a sizeable network of fans both in and out of the Big Apple. To keep in touch with this fan network, the Nets maintain an active social media presence. Currently, the Nets have over 2.7 million Facebook likes, over 1 million Twitter followers, and over 1.4 million Instagram followers. The Nets use the official hashtag #WeGoHard on all of their social media accounts. The official Brooklyn Nets social media accounts all represent excellent sources of Nets news and highlights for Nets fans everywhere.

Nets official fan outreach extends far beyond their social media presence. The Nets team website is full of content of all types for Nets fans. The team website contains all the team information a fan could possibly need. It also includes additional resources for fans, such as information about camps for young Nets fans, different fan experiences, and the team fan mobile app. The team is involved in community service as well, with Brooklyn Nets Assist the team’s main outreach program. The Nets’ numerous official team resources can meet the needs of almost all Nets fans.

In the search for the top football fan club, FanWide has interviewed the leaders of several prominent NFL football fan clubs across the league and nation. In our blog about the Chiefs, we highlighted the growth of the Chiefs fan base. The team’s success has excited fans across the country. One prominent Chiefs fan group is the “Chiefs Fans of Dallas”. The group’s leaders gave us insight into what makes them so special. 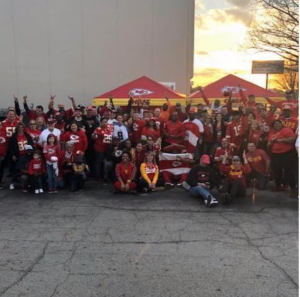 Visit FanWide.com to find a Kansas City Chiefs game watch party or fan club near you.

FanWide asked them the following questions about what makes their club one of the top in the nation:

It’s been a while since Super Bowl III- the Jets lone Super Bowl win. But there is hope. The team is looking for a quarterback. Correction- the team was looking for a quarterback. After years of journeymen QB’s and young experiments, the Jets have invested heavily in one of the most highly touted quarterbacks in recent years, Sam Darnold. The rookie out of USC hasn’t had the best season in the world, but the kid is 21 years old. Analysts across the league aren’t giving up hope yet. Nobody can explain it, but he’s got that “it” factor. At this time, the NFL is a quarterback dominant league.

If you have a quarterback, you have a shot. The Jets look to build a team around the California kid, and if you’re a Jets fan, you can only hope that the search for a franchise guy ends here. There’s hope on the other side of the ball too. In only his second year, Jamal Adams has forced himself into the conversation of best safeties in the league. The young talent has reunited Jets fans; though they’ve stayed with the team through the ups and downs, it hasn’t always been easy. Now, Jets fans walk around with new confidence. Their cross-town rivals, the Giants, have been struggling as of late, and this might be the Jets chance to take over New York.

Visit FanWide.com to find a New York Jets game watch party or fan club near you.