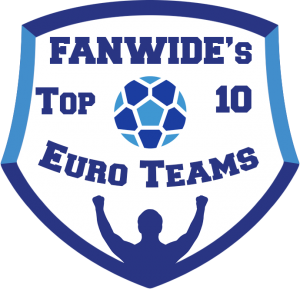 Fan Clubs (according to FanWide)

Fan Clubs are a unique measure of fan devotion and loyalty. By accounting for the number of fan clubs that a team has inspired, FanWide is measuring the team’s effect on viewers and their fan’s initiative to spread their fandom. FanWide’s unique fan club data allows for a deeper dive into fan engagement and a more accurate depiction of team popularity.

Both success on the field and popularity off of it rely on one very specific thing: star power. Players like Lionel Messi and Cristiano Ronaldo have dominated the pitch and the airwaves since they were teenagers. What else has dominated? Their teams. Star power is a key component of team popularity. Stars allow viewers to get excited in turn bringing in match day revenue, international recognition, and of course, fans. The UEFA Player of the Year is an annual award given to the most dominant soccer player in the world. To account for teams with players who had stellar years but came up short, FanWide used the top ten UEFA Player of the Year finalists as a measure of star power and popularity/success attributed to certain players.

Team popularity is often correlated to the size of their stadium and the loyalty of their fans. FanWide used home match attendance data from https://www.worldfootball.net/ as a way to measure how relevant different clubs are in their respective communities. Attendance data is used from 2017-18  in order to measure club popularity in the present, putting aside historical success and popularity.

In this age, teams are using social media as a way to interact with fans across the world. A fan can join a fandom with a click of the button. FanWide accounted for  Instagram followers,  Twitter followers, and  Facebook likes (as of February 2019)  in this ranking. FanWide accounted for this data in an effort to measure the number of people that take an interest in each team.

Each team considered in this ranking competes for a domestic league title each year. F.C Barcelona will compete for the La Liga title, Manchester City will compete for the English Premier League title, Bayern Munich will compete for the Bundesliga title, and so on. FanWide accounted for all time domestic titles won to measure the success that a team has had in their respective league. This is a metric that defines a club’s relevance, respect, and popularity in their given country. Teams were separately ranked based on their all-time titles and again based on their titles in the past 10 years. These two rankings were averaged in order to reward teams that have gained significant respect for having a tradition of success and penalize teams that have not succeeded on this stage lately (and vice versa).

The European soccer scene is unique in that it consists of 5 different comparable leagues. Unlike sports like football and basketball in the USA, which have teams that have competed against each other for years, some European soccer teams might face each other once every five to ten years. Naturally, ranking these teams is a challenge. FanWide’s goal in ranking the top ten European soccer teams was to use metrics that acknowledge the fact that not all teams get a chance to play each other. By using metrics like FanWide’s fan data, the focus in our rankings was split between on and off-field success. As a result, our top ten ranking consists of the most prominent, internationally significant European soccer clubs, accounting for but not solely relying on titles and wins. In the coming weeks, FanWide will be rolling out the top ten, building up to the reveal of the #1 soccer club in Europe.

Stay tuned for the release of FanWide’s Top 10 European Soccer Clubs, and keep your eyes peeled for the Top 10 MLB and NBA Franchises!