Although a majority of this organization’s success has been focused on the past five years, there is a great amount of historical value to the Warriors franchise. A majority of current Warriors fans are younger NBA fans who are attracted to the extreme levels of success the team is having yet many are blind to the fact that many legends have once represented Golden State. Wilt Chamberlain, Rick Barry, Nate Thurmond, Chris Mullin, Mitch Richmond, Tim Hardaway, Chris Webber, Baron Davis, Monta Ellis, David Lee, Jason Richardson, and Bernard King are only some of the names that have represented the Warriors. Currently, their roster is stacked out with Steph Curry, Kevin Durant, Klay Thompson, Draymond Green, Andre Iguodala, and Demarcus Cousins. It is hard to find an organization that has had as much talent as the Warriors throughout history. Let’s get into the nitty gritty on how the Golden State Warriors took home the crown in FanWide’s Top Ten NBA Teams ranking.

Visit FanWide.com to find a Golden State Warriors game watch party or fan club near you.

When will their fire and power ever dissolve? Every year they manage to maintain their reputation of being one of the most threatening teams across the league. They are the San Antonio Spurs. It is easily agreed upon that the Spurs have built the steadiest and most successful NBA franchise over the past 20 years. Starting with David Robinson and Robert Horry, then transitioning to the Tim Duncan, Tony Parker, and Manu Ginobili phase, then Kawhi Leonard, and now DeMar DeRozan, the talent never seems to end. The man behind the plan that has gifted the Spurs the immense amount of success they have had in the past 20 years is head coach Gregg Poppovich. With all of this, and more, the Spurs were able to land the #2 spot on FanWide’s Top Ten NBA Teams rankings. Let’s find out more about how the Spurs got second.

Visit FanWide.com to find a San Antonio Spurs game watch party or fan club near you.

Where do I even start with this franchise? Do I cover the Michael Jordan era? Do I talk about Derrick Rose and Jimmy Butler? Do I talk about the untapped potential they have on their team? The Chicago Bulls have been one of the most historically powerful franchises in the NBA. Let’s start at the beginning of the major success. In 1984, the Chicago Bulls decided to use their number 3 pick on a kid from UNC. This kid was Michael Jordan. The greatest basketball player of all time. Jordan went on to lead the Bulls to his historic 6 rings. With other strong teammates such as Ron Harper, Steve Kerr, Horace Grant, Dennis Rodman, and of course Scottie Pippen, the Bulls seemed unstoppable with Michael Jordan. After this streak of success faded, Derrick Rose was drafted in 2008 with the first overall pick. He carried the Bulls to a lot of success and even managed to win MVP in the 2011 season, making him the youngest player to win the MVP award. Currently, the Chicago Bulls are rebuilding and waiting for their next spark, yet their historical dominance allows them to place 4th in FanWide’s Top Ten NBA Teams ranking.

Visit FanWide.com to find a Chicago Bulls game watch party or fan club near you.

“With the first pick in the 2003 NBA draft, the Cleveland Cavaliers select LeBron James”. This statement, delivered by David Stern (commissioner of the NBA at the time), changed everything for not only the Cavaliers, but the city of Cleveland as a whole. All the way up until 2010, LeBron was committed to the Cavs and made them into a team that was not only well respected, but also feared across the league. After the (first) departure of LeBron, the Cavs no longer seemed to hold the same amount of strength as they had in previous season; however, they hit the jackpot with the #1 pick in the 2011 draft with future All-Star point guard Kyrie Irving. Although Irving struggled to bring the Cavs success in his first few years, he reignited the team’s spirits and potential. When LeBron returned in 2014, the city was joyous and the passion to win was back. During all of LeBron’s next four years as a Cavalier, he carried them to 4 straight NBA Finals appearances. Their most notable performance was coming back from being down 3-1 in the Finals and winning. The city of Cleveland was then branded as “The Land” as it was the center of focus across the league. This season, the team is fresh and young and is led by young guard Collin Sexton who has nothing but success in his future. With all of this going on for the Cavs, it is clear as to why they rank 5th in FanWide’s Top Ten NBA Teams ranking.

Visit FanWide.com to find a Cleveland Cavaliers game watch party or fan club near you.

From the perspective of fans across all sports leagues, Boston is the common enemy. Not only does this opinion exist because of the constant success most of all the Boston teams have, but also because their fans are some of the most supportive and rowdy fans. In the NBA, the Boston Celtics have had extreme levels of success recently and historically. Legends such as Bill Russell, Larry Bird, Kevin McHale and many more have steeped  the Celtics with historical moments. Additionally, Boston has not only the oldest active NBA team, but also the oldest overall NBA franchise, along with the New York Knicks, founded in 1946. Currently, under the guidance of head coach Brad Stevens, stars such as Kyrie Irving, Gordon Hayward, Al Horford, and Jayson Tatum lead the team to success. Let’s look at how the Celtics placed 6th in FanWide’s Top Ten NBA Team Rankings.

Visit FanWide.com to find a Boston Celtics game watch party or fan club near you.

Miami is by far one of the most active and passionate cities across the United States. On top of that, every season their home team, the Miami Heat, never fail to excite the fans and make strong pushes in the regular season. They struck gold in 2003 by drafting Dwyane Wade from Marquette with the 5th pick in the draft. Wade led the Heat, along with Shaquille O’Neal and others, to a title in the 2006 season. A few years later, LeBron James and Chris Bosh decided to join the Heat and led the team to four straight finals appearances, winning it in 2012 and 2013.

In more recent years, the Miami Heat have had a strong roster with Justise Winslow and Goran Dragic. Lastly, Dwyane Wade’s farewell season is this year this has for sure brought a lot of attention to Miami as a legend is retiring soon. He even got invited to play in this year’s All-Star game. Without further or due, let’s look into how the Heat placed 7th in FanWide’s Top Ten NBA Team rankings.

Visit FanWide.com to find a Miami Heat game watch party or fan club near you.

Popular. Scary. Legendary. Historic. These are only some of the many words that can be used to describe the Los Angeles Lakers. This past offseason changed a lot for the Lakers. LeBron James chose to sign with them and that reignited the fire within the fans. Along with many young stars such as Brandon Ingram, Lonzo Ball, Josh Hart, and of course Kyle Kuzma, this team has an absurd amount of potential carried by one of the best leaders to ever play the game. Nevertheless, one season good season is not the only reason they place in FanWide’s Top Ten NBA Teams ranking.

The Lakers have always been one of the most exciting teams to watch. The organization was founded in 1947, the second year of the NBA, which ultimately gives them an advantage over almost all teams as their franchise timeline goes back further. Kobe Bryant, easily one of the best and by far the most competitive player to set foot on an NBA court, spent his whole career with LA and recently retired in 2016. Other legends such as Shaquille O’Neal, the whole Showtime Lakers (Magic Johnson, James Worthy, Kareem Abdul-Jabbar), Wilt Chamberlain, and many more have all put on a Lakers jersey. You will never be disappointed watching a Lakeshow…trust me. No wonder why the Lakers were able to place 8th in FanWide’s Top Ten NBA Teams ranking.

Visit FanWide.com to find a Los Angeles Lakers game watch party or fan club near you.

The time has come! The #10 of FanWide’s very own Top Ten NBA Teams has been announced. Since its creation, FanWide has gathered data regarding fan clubs and fan engagement, which is used in ranking the Top Ten NBA Teams is unique to FanWide and has produced a ranking like no other. The metrics used to list the teams from first to last were based on both their on and off court success. This balance ultimately creates a broader and more balanced field to judge teams in the fairest way possible. Without further ado, coming at #10 on FanWide’s Top Ten NBA Teams is the Oklahoma City Thunder.

Visit FanWide.com to find an Oklahoma City Thunder game watch party or fan club near you.

On an international stage, the United States of America dominates in basketball. With five gold, three silver, and four bronze medals, with a 123-27 overall record, it is without a doubt that the best players across the world rush to play in America. Almost every park, neighborhood, and school has a basketball court. It can be deemed as an essential piece to building a community. With the strong presence of basketball in the USA, it is no surprise that the NBA is one of the most competitive and watched sports leagues in the world. Although the current NBA was formed in 1976, with the merge of the ABA and NBA, fan support for the thirty teams does not lack in power.

FanWide’s rankings are not based solely on success on the court nor success off the court. Rather, the rankings consider both in order to get the most wholesome analysis of each team. This balance in the rankings creates a broader field of data that allows for a ranking that is original and meaningful as it also uses proprietary data from FanWide fan clubs which is not available elsewhere. Read below to see the factors that were used to rank NBA teams based on data that was not limited to on-court success. 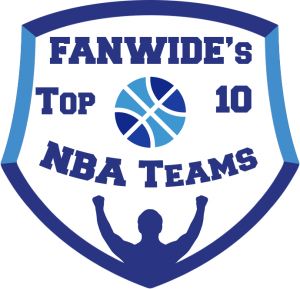