FanWide (http://www.FanWide.com) is a service that connects sports fans, alumni and fan clubs, sports teams, restaurants, and corporate brands.  We promote in-person watch parties for televised games and develop local fan communities for every pro, college and international team at sports bars nationwide.  Millions of out-of-market sports fans can use the free FanWide app to find the closest watch party for their favorite team, wherever they are living or visiting.

For about eighteen months in total, FanWide’s data analysts have manually collected information from over 10,000 fan clubs and watch party groups based in the United States for almost 1,000 different pro, college and international teams.

Below are some of the insights that we have learned from the 13 million data points we collected across 250,000 events since September, 2016.  Note that the popularity is based on the number of individual events, not the total number of fans.  There is also some geographic bias in the sample which shows more events on the West Coast, due to our expansion from our headquarters in Seattle.

Make sure you check out Part 2 and Part 3 later in this blog series to learn more.  Please visit www.FanWide.com/data or contact Data@FanWide.com if you have any questions or are interested in purchasing the complete data set.

FanWide’s data team has been rapidly adding new watch parties for fan clubs from around the country.  The graph below shows the weekly event count (in blue) and aggregate event count (in red). 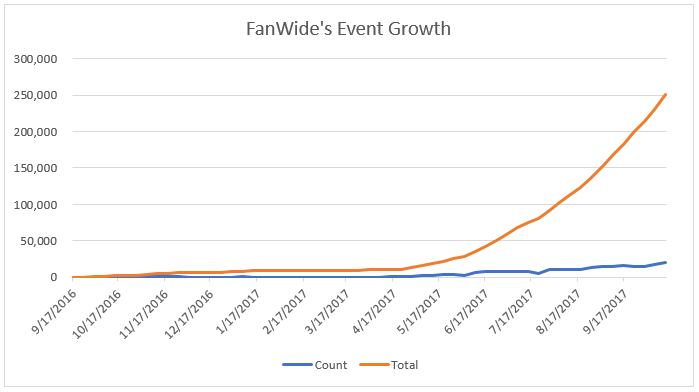 Here are the top five most popular sports, based on the number of events.  There are the most baseball viewing events, due to the number of games in the MLS season.  Football and Soccer are the next most popular sports to view in group, as there are so few games in a season that each one matters, so passionate fans will make sure that they attend.

Here are the top ten most popular leagues, based on the number of events.  Baseball again has the highest volume, followed by football.  Major League Soccer came in surprisingly high, which we believe to be due to some bias in our surveying, when we focused extensively on MLS data aggregation during the quiet summer period.

Here are the top twenty-five most popular teams, based on the number of events.  This included 11 MLB teams (which is expected due to the amount of baseball games each season), 8 NFL teams, 2 NCAA Football teams, 2 MLS teams, 1 NHL team and 1 NBA team.

Here are the top ten most popular National Football League (NFL) teams, based on the number of events.  The Buffalo Bills came in high despite their struggles in recent decades, which may be attributed to their success in the 1990s.

Here are the top ten most popular National Basketball League (NBA) teams, based on the number of events.  The results are as expected, with the recent powerhouses Cleveland Cavaliers and Golden State Warriors taking the top spots.  Surprisingly the LA Lakers and Houston Rockets did not make the list, despite their huge nationwide followings.

Here are the top ten most popular National Hockey League (NHL) teams, based on the number of events.  Five of the “Original Six” NHL teams are represented in the first seven spots, with only the Toronto Maple Leafs missing the Top 10.

Here are the top ten most popular Major League Baseball (MLB) teams, based on the number of events.  The results represent the most popular and successful teams from the largest markets, and is fairly representative of these teams’ overall popularity.

Here are the top twenty-five most popular soccer (football) teams based on the number of events.  These teams are from the following leagues: Major League Soccer (MLS – USA), Liga MX (Mexico), English Premier League (EPL – England), La Liga (Spain), Bundesliga (Germany), Serie A (Italy), and Ligue 1 (France).  Major League Soccer is most strongly represented within the US, followed by the English Premier League, with Arsenal taking the top international spot.  No clubs from France’s Ligue 1 nor Mexico’s Liga MX are represented in this list.

Here are the top twenty-five most popular NCAA Football (NCAAF) FBS and NCAA Basketball (NCAAB) teams, based on the number of events.  The Ohio State Buckeyes blew away the competition with the most active alumni network nationwide, and the Big 10 was the best represented conference.  Traditionally strong football schools were more popular than traditionally strong basketball schools, with only Kansas making the Top 10 (for basketball).

We hope you found this data interesting.  Please visit www.FanWide.com/data or contact Data@FanWide.com if you have any questions or are interested in purchasing the complete data set.

Make sure you sign up for FanWide to support your local fan club!